My first aim was to build a Skype phone styled like an old 1930s thing, just for coolness. Except due to electrical safety regulations, they're quite hard to come by in charity shops, especially with a budget like mine. So I decided to ask around a bit, and lo and behold, someone gave me a working cordless phone! Perfect. 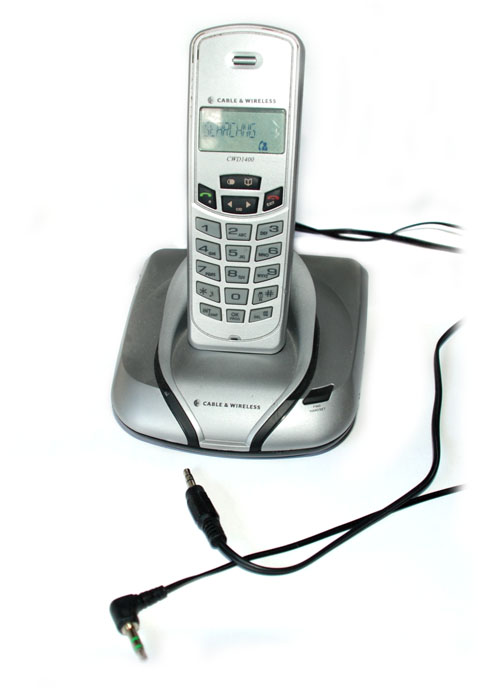 I'll give due credit to this page as it was helpful to the extent of poking around at the pins randomly to see which ones are right.

Which is basically all you have to do for this. You'll need: An old cordless phone, Two pairs of cheap headphones (or just two 3.5mm jacks), and some patience.

Take the base unit apart, plug it in, press the green button on the handset to 'turn on' the audio, and listen to it while poking around at the pins. Once you hear a click, you need to connect an audio source to that pin. You can do this by taking one of your stereo sockets, plugging it into an MP3 player or something, and linking one wire to the ground of the phone, and one wire to the pin. The ground is usually easy to spot, you could just trace it back to the power connector if you're in doubt. If you hear the music on the handset, you've found the right pin, and you can solder the wires in place. Otherwise, keep looking.

The microphone pin is a little harder to find as you need to keep making a noise or blowing on the handset, while listening with a pair of headphones to the pins. If you got the plugs from some headphones in the first place, you'll have some earbuds still lying around which you can use. Again, one wire goes to the ground, the other to the pin you're testing. If you hear your blowing on the handset, do a couple more tests to be sure and then solder the jack in place.

Close it back up and you're done - it should still work as a normal phone too. Just plug the wires you've soldered to it into your PC's microphone and speaker ports.

Naturally it's not as good as a professional one, but with a cost of zero there's nothing to lose. It would be better if there was software which recognised which buttons you were pressing, but sadly that may be too much effort. It'd be nice to have a cheap phone-socket-to-usb adapter which worked with the buttons and interfaced to Skype, which would mean no modding of phones at all, but the only ones I've seen have been too expensive.