To me, little model steam engines are entertaining but their power is wasted on their tiny flywheels. So, an idea.

Imagine a piston pushing against a spring. Its position would be proportional to the input steam pressure. If there were slide valves exposed when the pressure reached a certain level, we basically have a transistor.

So, using logic gates from steam pistons we could in theory construct a steam-powered computer. Not steam-engine-powered, but genuinely steam-powered. Naturally the best application of this technology would be a desktop calculator.

The beauty of the arrangement is that steam pressure would directly correspond to electrical voltage, and assuming the cylinders were glass, one could watch it calculating and know that the flow of steam is virtually identical to the flow of charge in the electronic version. 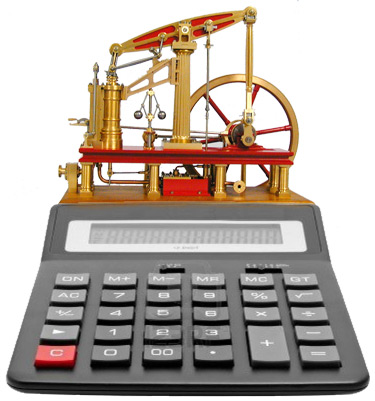 Alternatively, the working fluid could be cold water, and the pressure provided by a stand pipe with hydrostatic pressure. That way, you needn't wait half an hour for the boiler to heat up when you want to do a calculation.

One idea for the display is to colour the fluid. Its presence in clear pipes could form the basis of a seven-segment display or maybe a nixie-type arrangement. Or, the pressure could drive pistons which physically move flip-digits or panels. Another idea would be a DAC which then feeds a pressure gauge labelled 0 to 9.