It's a brilliant - if a little impractical - idea. I know a few people who'd happily give me money if I made one of these.

Basically, you scramble it up to set it the night before, and in the morning, you have to solve it to turn the alarm off. By the time you've done that, you'll probably have woken up.

There are instantly many problems with it, though. First, how do you set the time? There'd have to be a screen, and normally it would be much too expensive to have it on one of the tiny cubes. Also, what about changing the batteries? How does it tell when it's solved? And so on.

Solutions vary from making the whole cube bigger, to having a sort of docking station. Neither of these are that great.

As for recognising when it's solved, it would be possible to place some kind of grid on the inside face of each cube. Each would have unique contacts, and when all the cubes were orientated correctly, they would make a complete circuit. Once designed, this wouldn't be too difficult to implement.

The main problem though is the battery and screen. A normal battery would need a very big cube to fit in, even going along the fixed axes of the cube. A custom shaped battery or series of small batteries within individual cubes would be difficult to join together as all the cubes can move. Some kind of positive/negative rail about the fixed axes could work, but the brushes would be likely to break, and there's still the issue of charging it.

Perhaps the best idea would be to have the cube and the alarm separate. The cube would only need to know if it was solved or not. All the electronics could fit in a single corner, which would have a tiny battery charged by induction, like a toothbrush. Some electromagnetic pulse could retrieve whether it's solved or not. This way it'd be pretty hard to cheat, and still fairly easy to use the cube. 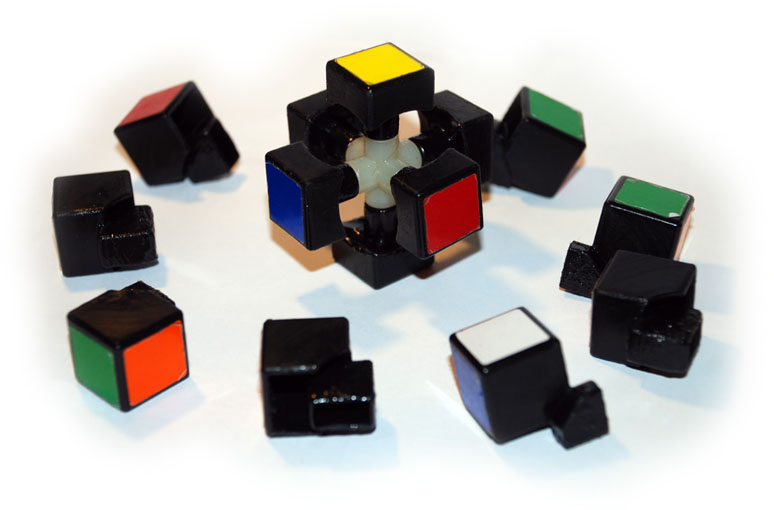 In pieces, it's hard to see where any electronics could fit.


Sadly, the difficulty of making such a thing is probably why it's not been done before.