Here's a topical project (not). At the time of writing (July) we're about as far away from Halloween as it's possible to be, but let me tell you about my costume last year.

The trick to a halloween costume is to pitch the right amount of effort. Too much, and you've tried too hard, which means automatic disqualification from the unspoken contest amongst the judgemental eyes of other party guests. Too little, and, well, you're just not trying, are you?

In-keeping with my trend of ludicrous and sometimes terrifyingly whimsical costumes (Tinfoil Space Pirate, Dead Cyclist complete with Bloodied Helmet, "Sexy" Witch) and somewhat overcompensating for the fact I missed Halloween in 2017, the plan for 2018 was to up my prop-game by bringing a certain amount of blinkenlights, high voltage, and real plasma into play. I also decided to wear a jabot.

Lucky for me, I've had a broken 40W laser tube hanging on my wall for the last few years as I couldn't – until now – think of anything to do with it. 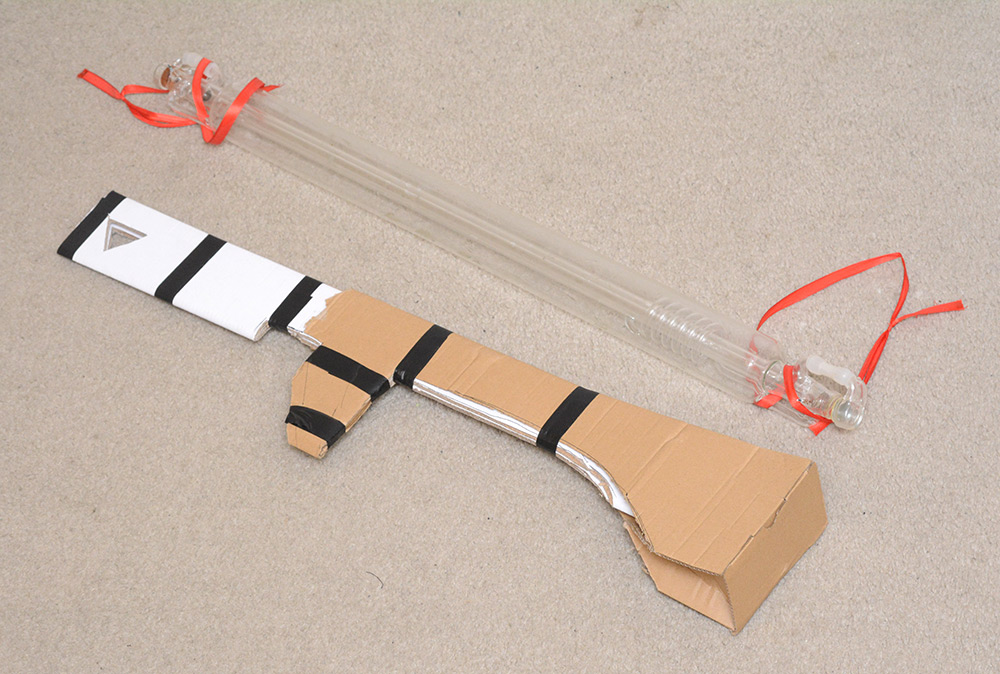 And underneath is a simple stock from cardboard and tape. This forms the body of the cannon and also houses the batteries for it all (a USB power bank). The cardboard was then given a light coat of black spray paint.

Illuminating the laser tube can be done in a number of ways. One of the coolest things to do is to fill it with UV-sensitive dye, then mount UV LEDs underneath it. But unfortunately the reason this laser tube was retired is that there's a large crack in the glass, and the fairly toxic dye would leak everywhere. Instead I found the perfect item on eBay: a sound-sensitive "VU meter" for just a couple of quid.

The VU meter had a whole collection of surface-mount LEDs that respond to sound levels, so I unsoldered them, and tediously extended the wires out to normal LEDs that I placed all along the stock. 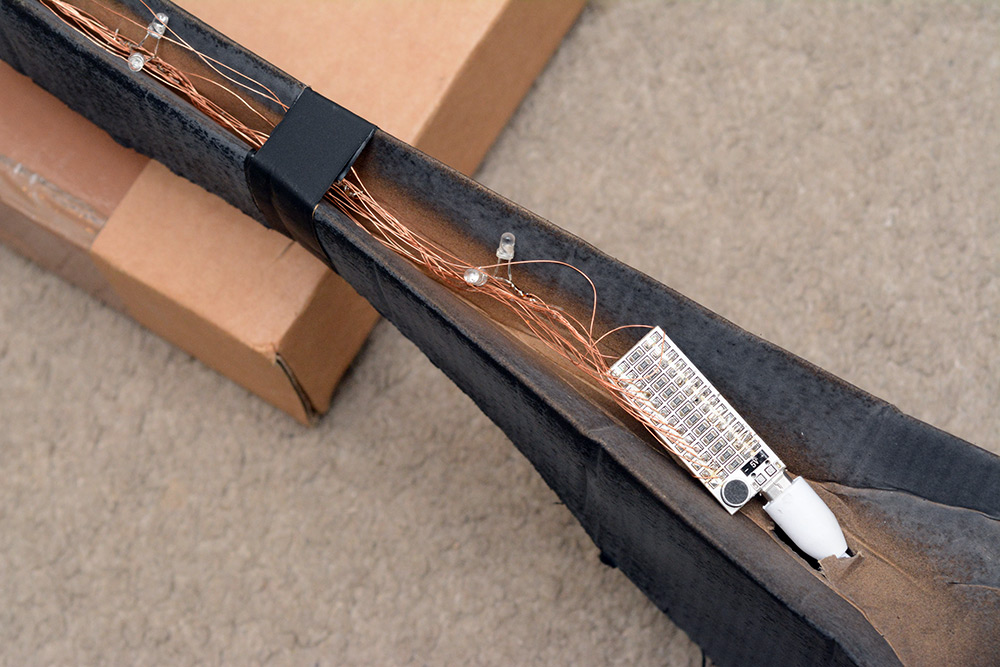 The laser tube gets taped on top of this, and acts as a kind of light guide. 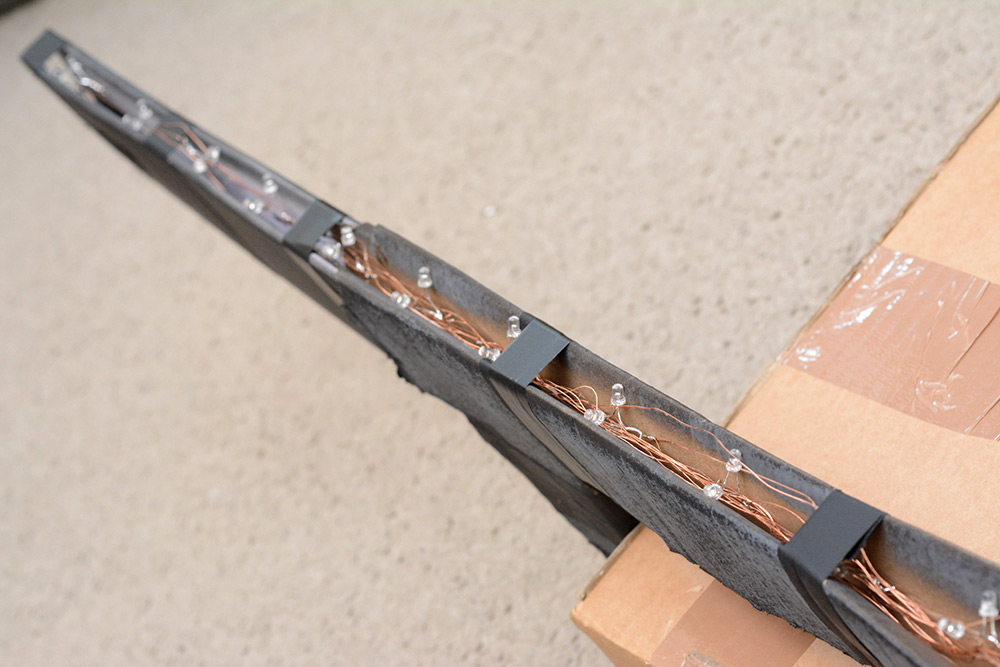 There's a button on the VU meter that cycles through the modes. That got brought out to the trigger position. 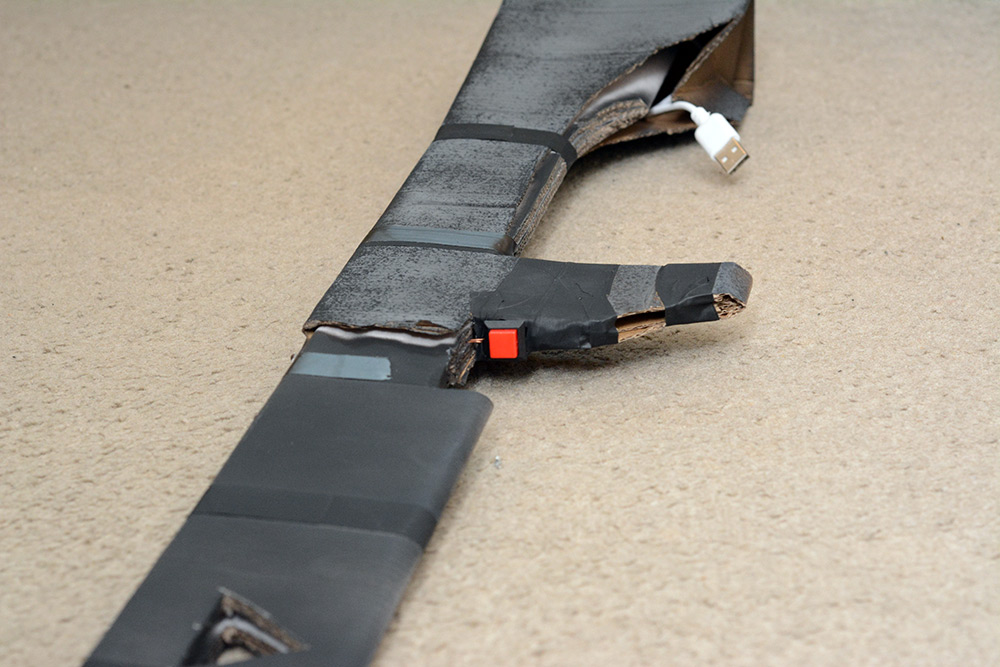 Great! But, it wouldn't be a plasma cannon unless it involved REAL PLASMA. 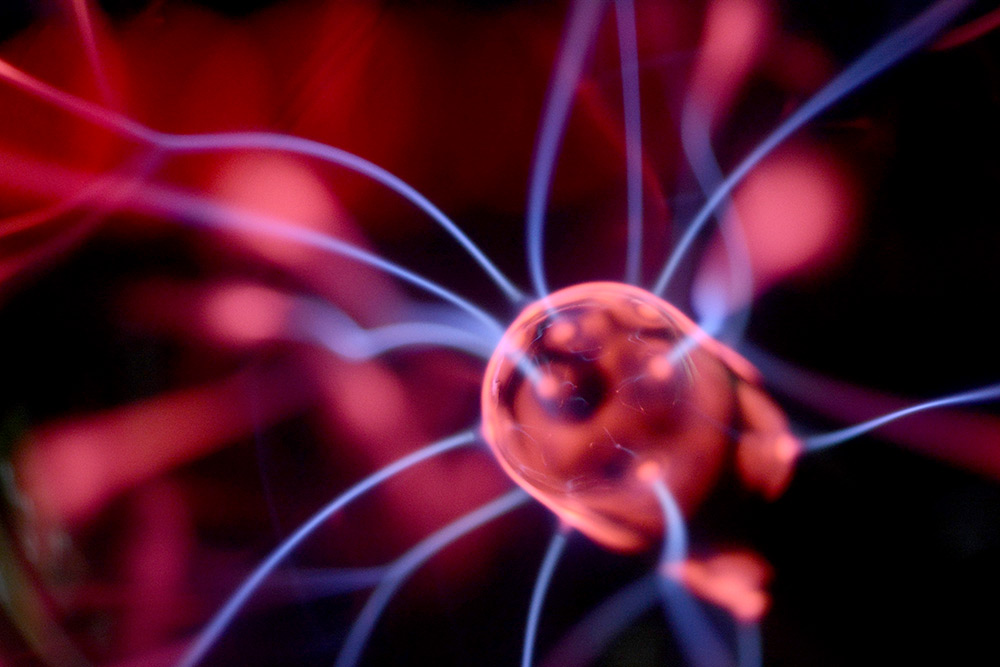 A USB plasma globe was bought and dismantled to make the centrepiece of the weapon. The circuitry and other gubbins were shifted to inside the cardboard, so the bulb could be attached directly to the tip of the laser tube.

With that, we've managed to hit the perfect spot between cardboard, lasers, high-voltage and sticky tape. 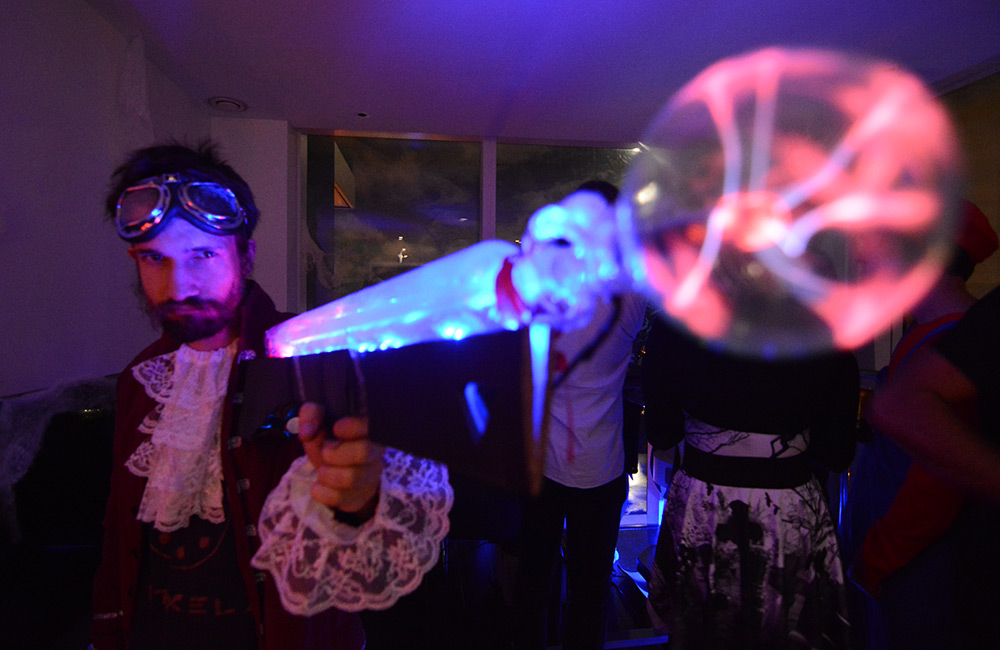 See? Jabot. I also had a hat, but it wouldn't have been much of a party if I hadn't traded headgear within moments of arrival. The complete costume, with tails and top-hat, was called – as if I even need to tell you – Victorian Time-Travelling Warrior From The Future.