When I say ridiculously small, I mean it. I'm talking go-karts smaller than half a skateboard.

Specification.
They have to be powerful enough to carry a person, obviously.
They have to be insanely small.
They need to be cheap enough to build that we can make four or five and race them about.
They should hopefully be able to turn corners without you falling off. Maybe not, this'll add to the fun.

Engine
Good question. Cost no object, little 2 stroke engines would be the best. Second in line would be 24v electric motors, although the batteries'll be pretty expensive too.
Our latest idea is to use cheap cordless drills. The advantage being, in one cheap package, you get a motor, throttle control, battery and charger. Even if they're too weak and you need two on each kart, this'll still work out the cheapest method so far.

Here's the basic design. The platform needs to be as small as possible while still letting you stand on it. There probably won't be a seat.

And here's an artist's impression (another doodle) of someone riding it: 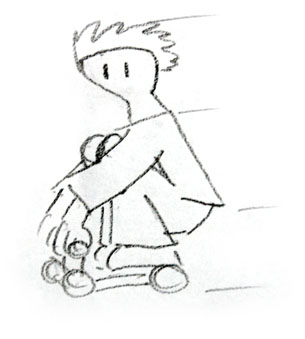 An alternative way of riding it would be to sit on the platform and stick your legs out in front, but that may be equally difficult.