My halfbaked dreams of flying machines frequently focus on the most ambitious goal of all: the human-powered ornithopter. All of the incredible challenges of a pedal-powered aeroplane, with the additional constraint of generating lift only by flapping its wings.

The only aircraft to ever meet these constraints - and fly - is the Snowbird, built by the University of Toronto. With a towed start, the Snowbird sustained flight for 19 seconds. There is a video of it on youtube. Some pedal-powered aircraft have set impressive records like crossing the English Channel, but for an ornithopter, 19 seconds is the best humanity has ever managed.

The problem is that the scaling laws do not go in our favour. The Snowbird succeeded by having a wingspan of over 100 feet which flapped incredibly slowly. Even if you take away the condition of it being human-powered, no one has ever built a good ornithopter. Some petrol-powered ornithopters have flown, but never particularly well. The only ornithopters that work are small radio-controlled models.

This isn't surprising. At a much smaller scale, it's quite easy to build an ornithopter. There are even elastic-band powered ornithopters that fly for many minutes at a time. Clearly, the route to a more effective ornithopter is to use lots of small wings.

Until recently, building a flock-of-birds ornithopter was out of the question, because of the difficulty of power transmission, but over the last decade the RC modelling community have seen spectacular improvements in brushless motors. A new kind of helicopter has taken off, so to speak, in people's back yards, one which uses dozens of small drone propellers instead of a single large one.

The aircraft I envision would be something like a hang glider, but instead of a large wing, the pilot would hang under a triangular flock of mechanical birds. Each bird would have its own brushless motor, and be supported in a grid of fine wires, which provide both electrical power and mechanical anchoring. The pilot pedals on a small electric generator, sending power up through the same cables that hold the vehicle together. This electronic transmission would have a huge weight-saving over anything purely mechanical. 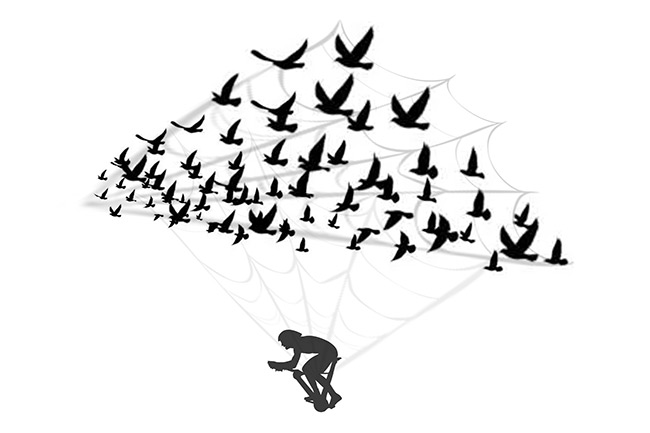 Perhaps using electronic transmission and hundreds of small wings is against the spirit of the challenge, but you can't deny the appeal of a human-powered ornithopter that might actually fly.