Whilst musing over the value of hydro-analogies to explain various physical phenomena involving energy levels, I stumbled upon an interesting and apparently widely believed belief that water will not flow uphill. Poppycock!

Naturally one could power a pump from a separate turbine. In fact, there exist all kinds of pumps powered by water flow. But a more subtle question remains: is it possible for water to flow uphill without the aid of machinery? A well known example is Heron's Fountain, where the flow of water into a sealed reservoir pumps water out of another via the effect of changing air pressure. But when the chamber fills, the flow stops.

The real question is, then, is it possible for an arrangement of (stationary) rock in a mountainside to divert part of a continuous stream of water to an altitude greater than where it originally started? I propose an outline of such an arrangement below.

We shall make use of the water hammer effect. When a flow of water with a non-negligible momentum reaches an obstruction, it suddenly draws to a halt and experiences an impulsive pressure spike. Hydraulic ram pumps, which make use of this effect, require multiple moving parts.

We shall also utilize syphoning. Supposedly Pythagoras invented his syphoning cup after witnessing the same effect in a natural cave formation. A rock pool would gradually fill and then suddenly drain, because of a raised portion in the drainage path which required a minimum water level to overcome.

The final ingredient is the simple observation that some paths are easier for water to flow through than others. This is taken to the extreme in the Tesla Valve - a check valve with no moving parts.

Let us assemble the creation. At the start is our intake pool where the stream flows in. This has a syphon leading away; the water flow will be in periodic bursts. At the bottom of this tube is a Tesla valve pointing downwards to minimise back-pressure up the syphon. Below this are two outlets, the high-pressure outlet leading up the hill (which also would need a Tesla valve to prevent back-flow) and the waste outlet, leading down the hill, which would need a contrived restriction. By this I mean a Tesla valve with a specific (smaller) number of nodes.

When the syphon drains, the water gains downwards momentum. It strikes the waste-valve-restriction and forces an amount of water up the high-pressure outlet pipe. Then the water in the tube slowly drains through the waste outlet whilst the syphon refills. We must pay attention to the number of nodes in the valves since the waste must drain away faster than the high-pressure outlet, which must remain primed for the pump to work. 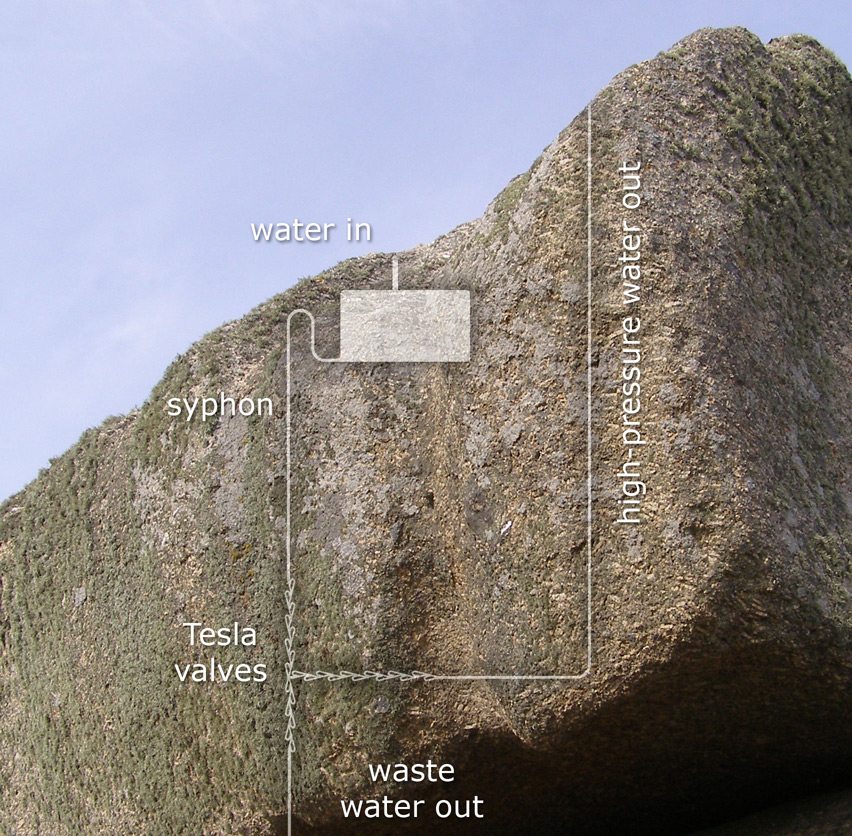 It is of course inconceivably unlikely that this arrangement would form naturally. Additionally, the efficiency would be so low that even slight deviations from, for instance, a perfectly smooth-walled tube, would probably prevent a measurable amount of pumping from occurring. But if this were carved out of a mountainside and performed as expected, pumping water uphill with no moving parts, it would make a powerful statement about nature. Stating what, however, I know not.