James Joule's heat apparatus is one of the most under-appreciated experiments in science. It's just a paddle wheel in a bucket of water. By demonstrating that the mechanical work done on the water raises its temperature, Joule basically invented the idea of Conservation of Energy.

In tribute to this great moment of science, mitxela's crack team of product designers have invented a mechanical kettle. No, don't worry, there are no paddle wheels involved (that sure would be some paddlin')!

Joule's Kettle makes use of the same technology as the latest waterjet cutters. There are two nozzles, aimed directly at each other. When the flow is turned on, the cold water streams shoot out at terrific speed, collide with each other, and through the magic of Joule heating, hot water lands in your mug. 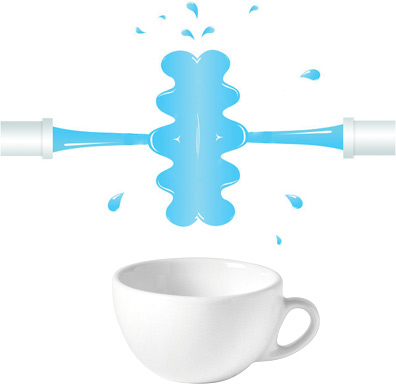 [Back of envelope: 75°C increase would require a pressure of ~46000psi, which is well within the range of high-end waterjet cutters!]