Something I did a few years ago and have been meaning to post here. A medium format, 6-by-9 folding camera needed repair. There were a few things wrong with it - a hole in the bellows, stuck aperture blades and a few other minor/standard problems, but there's one particular problem and its solution that I want to describe here. The focus ring was jammed, and either as a result of my dismantling and cleaning or just anyway, the rangefinder mechanism was out of alignment.

The rangefinder on this camera pops up from the front and works with the viewfinder part by rotating two circular prisms. It couples to the focusing mechanism by a friction fit and setscrews, so is freely adjustable. Once the camera is repaired, to calibrate the rangefinder, you usually align the infinity focuses, since it's assumed that if they are aligned in one place, they are aligned for the full range (if not, you have much bigger problems). Setting infinity focus on the rangefinder is easy enough - just find some distant building to point it at. But how do you tell that the main lens is focused at infinity? There is no ground glass, and even if you tried to fit one it would be difficult to be sure that it is in exactly the same plane as the film would be.

Here's the technique that I came up with. To do this, you will need:

So, you have an in-focus image at the exact film plane of the folding camera, illuminated by the torch. When you look through the SLR's viewfinder, the split prism will align if, and only if, the optical path of one camera exactly mirrors that of the other, i.e. when the folding camera is at infinity focus. By racking its focus ring you can quickly and accurately find that point.

I thought this was an ingenious solution to the problem and wanted to share it. 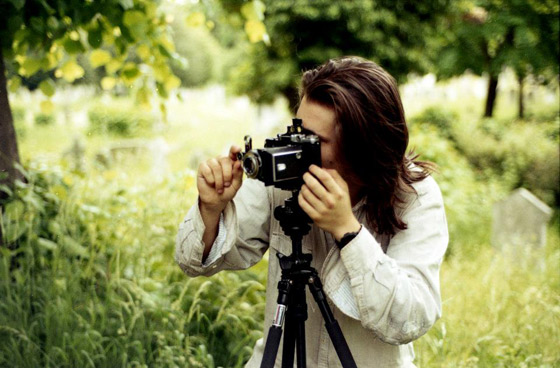