Instead of a pendulum escapement, this mechanical wall clock uses a sand-filled hourglass timer that lasts one minute, and when the sand has all fallen it updates the display and inverts the timer to count the next minute.

This is an animated illustration of what the clock might look like. For clarity I made its timer only ten seconds, and the moving parts are just decorative. A physical construction would probably need to be arranged quite differently.

In order to explain how it works, I have to talk a little about physics. Imagine an hourglass that's just been inverted, sitting on a weighing scale. With the sand falling, but not yet hitting the bottom of the glass, there are fewer grains in contact with the glass, so it appears to get progressively lighter. When a grain of sand hits the bottom, it delivers an impulse equal to the gravitational potential energy it had. So for most of the time it's operating, the continuous stream of sand delivers a force exactly equal to the weight it apparently lost at the beginning, and the hourglass appears to weigh its usual amount. As the timer approaches the end, it stops losing weight to the falling grains, but continues to receive impulses at the bottom, so the whole hourglass momentarily appears heavier. 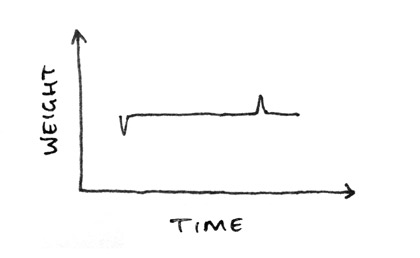 That last sentence is the important one: when the timer finishes its run, there is a sudden spike in its weight. This is only a tiny increase (determined by the weight of sand 'in flight' during operation) but nonetheless detectable.

Hence, the Hourglass Mechanical Clock has its hourglass on a balanced arm, with a sensitive hair trigger listening for that signal pulse. When the mechanism fires, the minutes of the display rolls over, the arm twists to invert the timer, and the hair trigger is cocked again. All powered by a falling weight, of course.