This is one of those ideas that just seems so obvious it beggars belief that it has not already been done.

Take a vertical wind tunnel. In fact all you need is a very powerful fan. This blows a strong wind upwards that a skydiver can jump into and, within a diameter of a few metres, happily float around indefinitely.

Now consider the goldfish bowl. Recent improvements in technology, in conjunction with an idea once posted to the halfbakery, have allowed goldfish to roam on land. A camera tracks the fish as it approaches the edge of the tank, and drives the vehicle in that direction.

Thus -- thus! -- the only logical progression for these two technologies is the Flying Car. The driver, or pilot, floats merrily several metres above the vehicle, and by flying in a certain direction can steer the contraption to follow, thus! experiencing continuous uninterrupted flight across all manner of terrains. 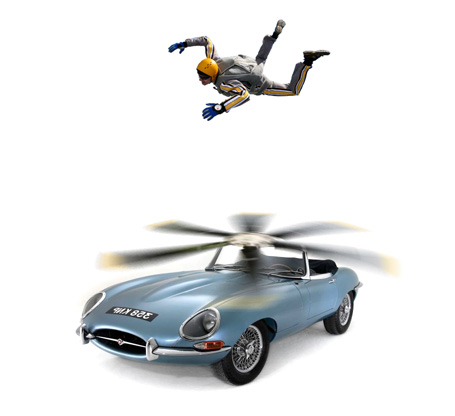