A christmas gift. And what better gift could there be than the Executive Decision Maker featured in the film Brazil? I really tried to get hold of one, but it transpires that it never was a real product – it was custom built for the film at a cost of around $2000. Which is funny considering that it was meant to represent the cheap tat people mindlessly give to each other during the festive season. 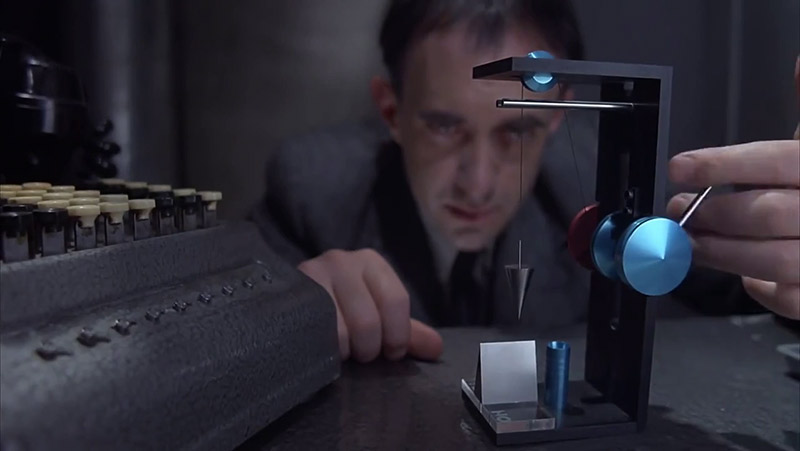 Not to be defeated, but also not feeling strongly enough about it to machine the whole thing out of metal, I settled on making a laser cut replica.

The design was thought up in one go, down to the last detail. I couldn't quite think of a way to get the button and handle to be coaxial, within the limitations of laser cutting, and I wanted to be sure that when the ratchet is disengaged there was very little friction on the winch so it falls freely.

The ratchet was the first bit I thought up, and is probably the most satisfying part of this. The moment I thought of it, I laser cut a prototype out, and it worked astonishingly well, right from the moment it came out of the machine. I wonder what other mechanisms are just waiting to be liberated from a single sheet of acrylic? 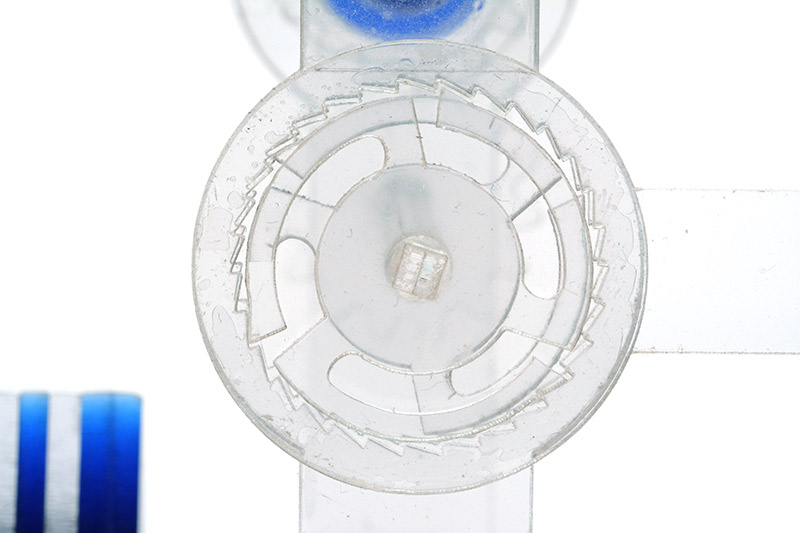 There is very little glue in the build, nearly all of it's press fit. It would be nice to have no glue at all, but that would have meant making an extra frame around the ratchet and handle.

The weight was turned on the lathe from steel. I don't think we could have laser-cut this part. It needs to be weighty. 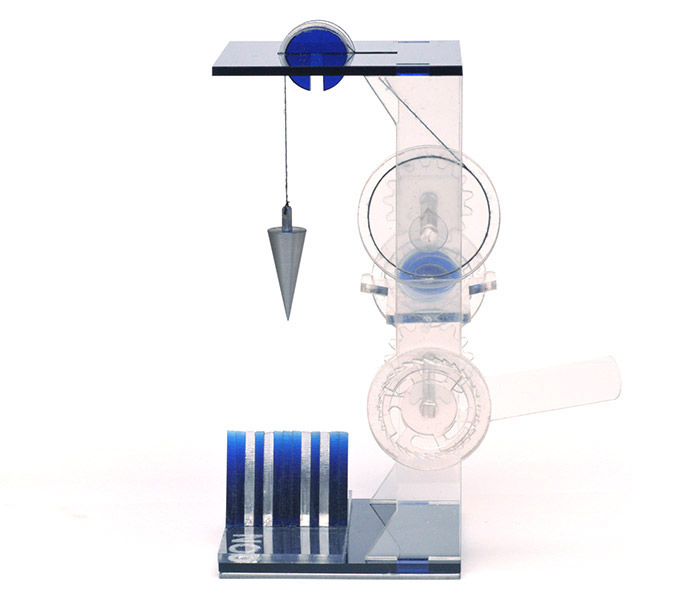 To make the whole thing less likely to topple over I added a 2mm steel plate to the bottom.

The Yes/No decals were etched onto the back of the part supporting the wedge. Interestingly, what with it being hit repeatedly by the weight, it seems to have spawned some stress fractures. Maybe thicker acrylic next time? 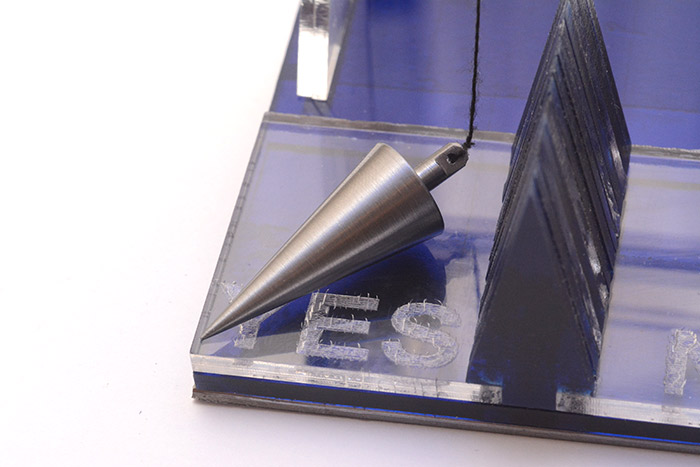 In order to release the weight, we need to disengage it from the ratchet. At first I thought of pushing the shaft that holds the ratchets along, so that they jump out of their spiky cages and can freewheel, but instead I opted for a pinion gear that's pushed out of the gear train. I figured this had a higher chance of working first time.

Then I was thinking about what type of spring to use, and whether I had any of the right type in stock. Acrylic is pretty brittle, but for small displacements it has some flexibility. Is it possible to cut a spring out of acrylic? Worth a shot, I figured.

The design is just a spiral etched into the plastic. It's a double-threaded spiral, which is important to keep the thing balanced. A single threaded spiral would deflect unevenly and the gear would go skew-whiff.

We only want it to disengage from the winch gear, not the ratcheting gear, so I made that one out of the thicker acrylic. Even if it does disengage, as soon as you start to pump the ratchet it slots back into place. 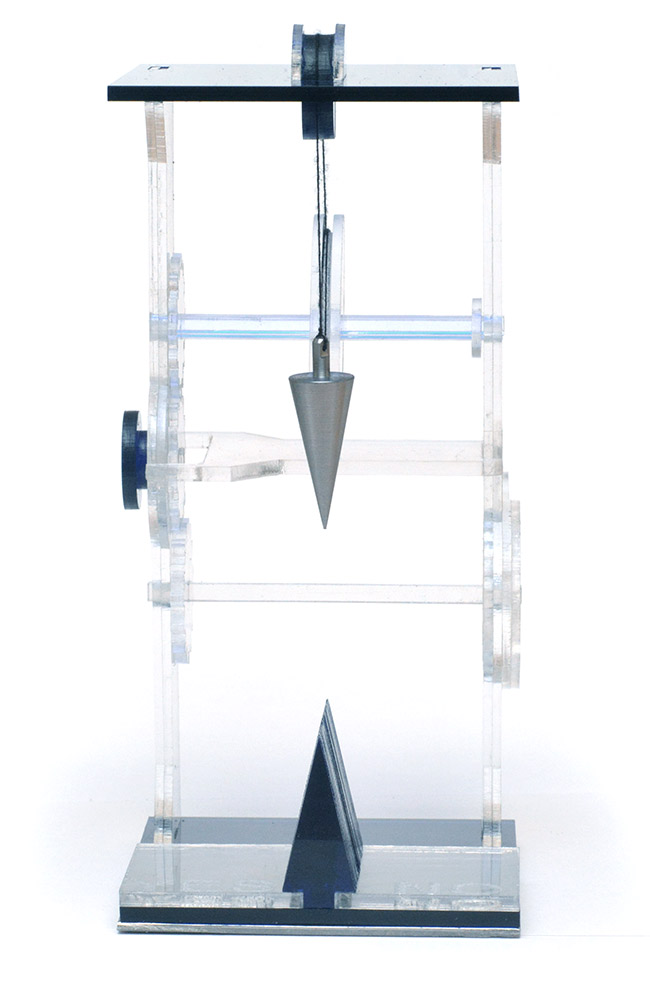 The wrench-shaped brace across the middle looks like an afterthought, and it was. I hadn't planned on the vertical parts of the frame being so flexible, so when the button was pressed by squeezing both frame parts together, as is natural to do, squeezing too hard meant mechanism jammed. The brace solves this entirely, but looks a little ugly. With this in mind, the frame could have slots to support the brace so it blends in a little better.

The pulley on the top doesn't rotate; it doesn't need to. It needs to be very well centred, and since everything cut by the laser has a slight taper to it my solution was to cut two circles and press them against each other in opposing fashion. This means there's a very slight taper towards the centre. Unfortunately the taper wasn't quite enough, and after the weight hits the ground the slack cable would sometimes jump off to the side. The only solution was to add extra guards to the edge of the pulley, which I glued in place. In the next iteration these could easily be jammed into slots in the top plate. 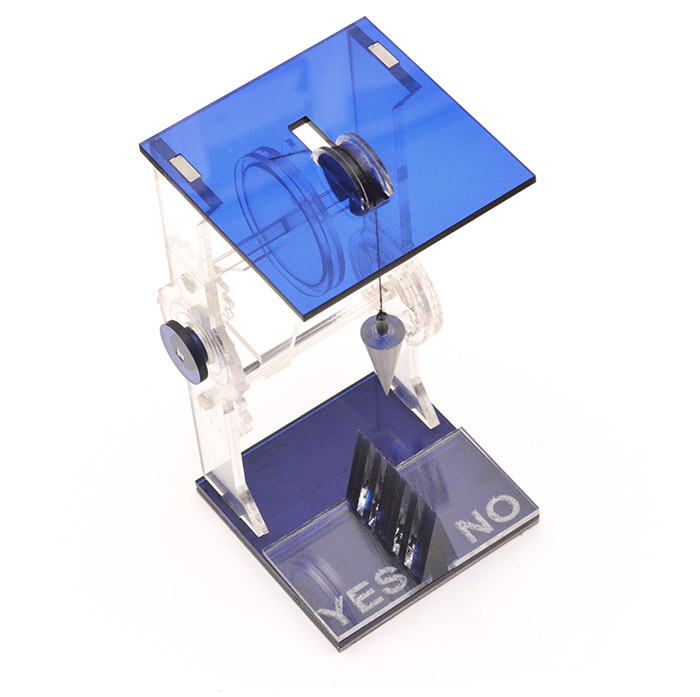 With some tweaks, this whole thing could be cut out from a single A4 sheet. Or perhaps two sheets. I used a mixture of 2mm and 3mm acrylic (and blue and clear, obviously) because that's what I had available, but it would be neat if we could cut the whole thing in one go from one sheet.

It's only as I write this that I tried to take a screenshot from the movie of the device, and I may be imagining things, but to me, it looks like the thing is biased towards "no". Well, no one said it had to be 50/50. 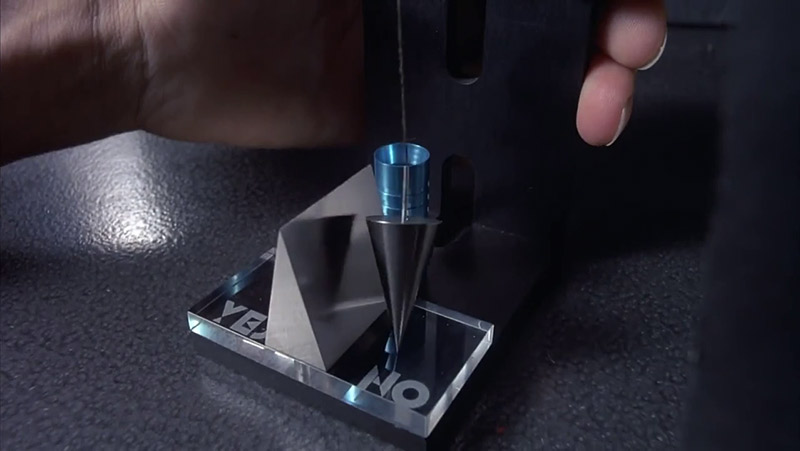 I should have tried to copy that funky font – maybe next time.