This project log is intended to be less wordy and more video-y.

I thought I'd build an etch-a-sketch style input to control a computer, as a USB mouse. I'm going to use the rotary encoders I have left over from the Midi Interceptor project. 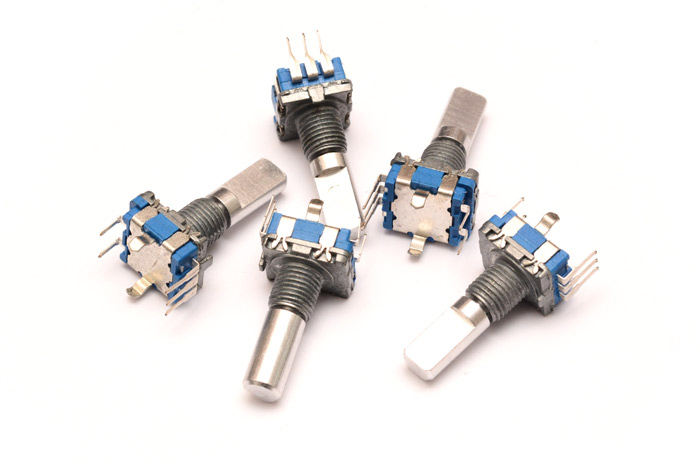 Unfortunately these are clicky as you rotate them, but that can correspond to the discreteness of the pixels on the display. I had thought about using stepper motors as encoders but ended up thinking they wouldn't be as precise as their smooth, damped rotation suggested they should be. The illusion of higher resolution than reality. Also it seems a waste to use a stepper motor for anything non-robotic.

The encoders output a 2-bit gray code. This just means two pulses that overlap each other, and from that we can deduce both direction and speed of rotation, since it steps through a complete cycle of the gray code in just one click of rotation.

Unfortunately just wiring this up to the chip isn't going to work because we don't have enough pins. By using the technique given in the EasyLogger example we can calibrate the internal oscillator/PLL to 16.5MHz from the USB frame length, which means we don't need a crystal, but that still leaves us just three IO pins to read our encoders. Not much of a matrix can be made with just three pins.

Much like the keypad for my Precision Clock Mk I, we can use various resistors to turn multiple switches into a single analogue reading. But with a keypad we don't generally care about multiple buttons at once.

Simply pulling down/pulling up using the encoder pins would work, but the voltages would be very unevenly spaced and I was concerned about how quickly and accurately we could read it (rotary encoders are notoriously difficult to debounce).

I eventually gave each encoder a miniature R-2R ladder DAC for four voltages corresponding to the four possible states of its gray code. The voltages are not spaced entirely evenly but easily good enough for our needs. 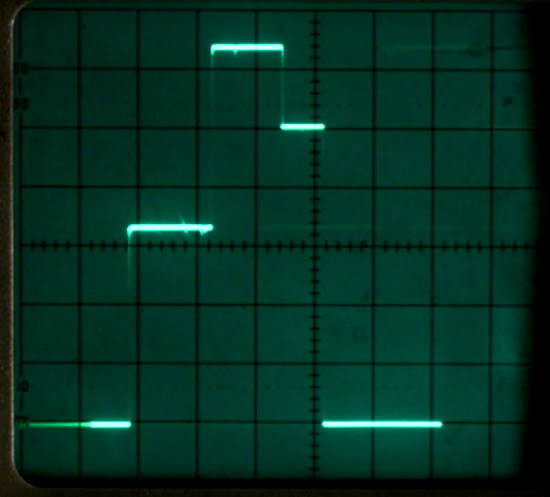 The waveform from turning the knob one click, 0.5V/division.

I figured three pins, three analogue inputs – being the two rotations for the axes, and the two mouse buttons going into the third input. Unfortunately I forgot the details of the pinout of the ATtiny85:

PB1 and PB0 have no ADC channel, and PB2 is the INT0 pin, needed for the hardware interrupt for V-USB. Possibly we could rewrite it to use one of the PCINT pins? Too much effort. There's another ADC channel on the reset pin. Normally to use the reset pin as an input/output you have to disable it via the fuses, which means the chip can no longer be programmed via ISP, only HVSP (high voltage serial programming). I've been meaning to make a high voltage fuse resetter, but haven't gotten around to it yet.

However you can still read the analogue channel without disabling the reset pin, so I tried an idea and it worked: so long as the analogue voltage is above the 'low' level, of about 2.5 volts, it won't reset the chip and we can read it without problems. Excellent! For that reason I turned the button resistors upside down, so the voltage is 5V without pressing anything, dropping to about 3V with both pressed. 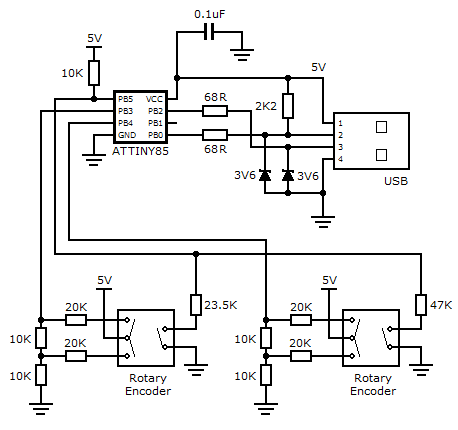 The USB bits (zeners and inline resistors, pullup resistor for data line) I fitted inside of the USB plug. 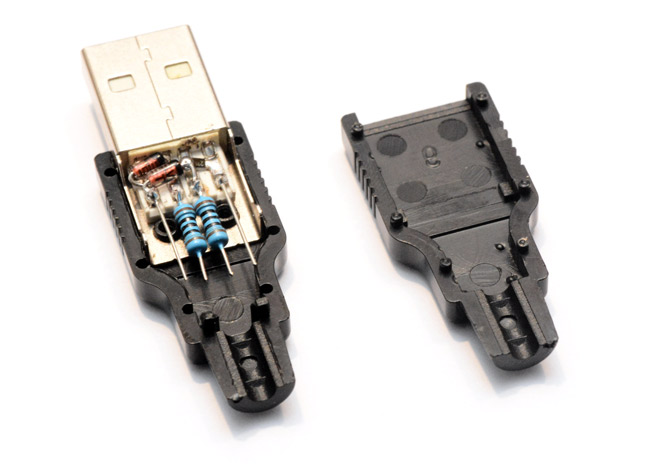 Pullup is SMD resistor on the right. Couldn't find any suitable cable, but this is a low speed device so ordinary ribbon cable is fine. 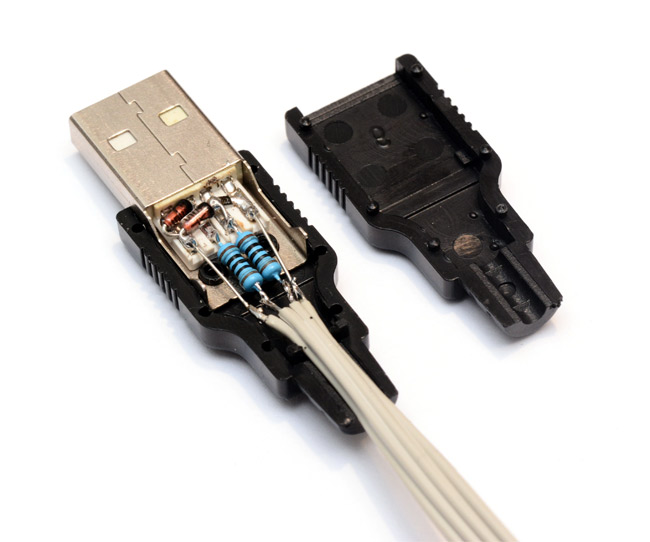 Next I laser cut some knobs and a case. 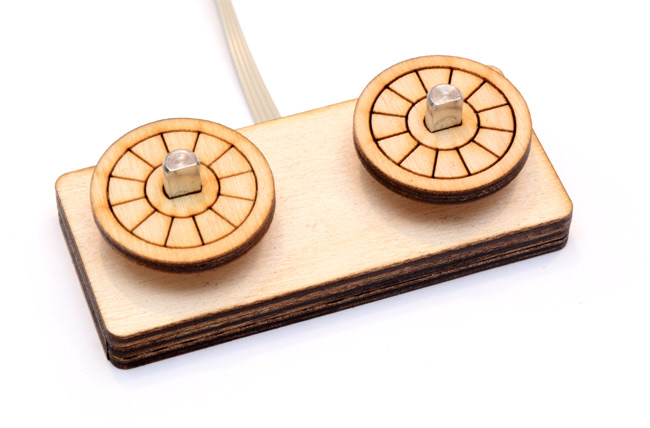 The underside, the ribbon cable is stuck into a channel I carved with a stanley knife. The encoders go through the laser cut holes of course. The whole case, apart from the back that screws on, is glued together with cyanoacrylate. I must say, laser cut project boxes are very quick to make. And tailored to size of course! 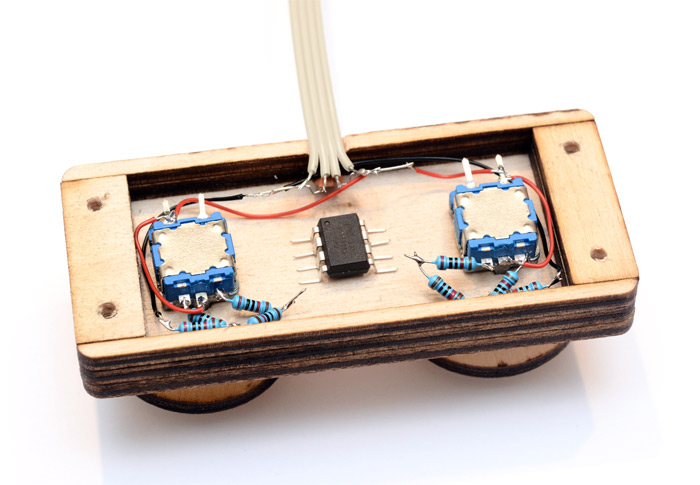 A better look at the R-2R ladders. They are a bit squished. 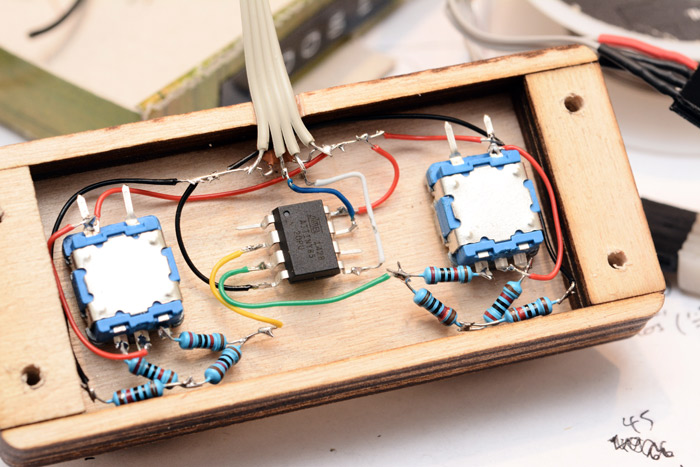 That was before changing the plan for the buttons. This is after. 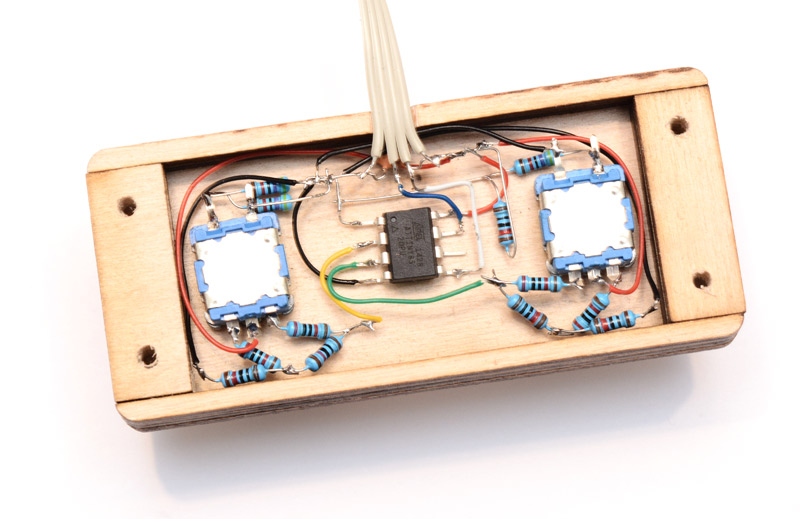 So. I should talk about the code. I used the V-USB library, just like with the Morse Code USB Keyboard, only this time we need the report descriptor for a mouse. Luckily V-USB comes with an example for just that, and also the hardware and vendor IDs from a logitech mouse.

First thing I made to try it out was sending a report of just Mouse X= +1. This makes your mouse continuously drift to the right.

Then I used the ADC to read a potentiometer, and made a sort of one-dimenional joystick.

Then I made it recognise the encoders.

The encoders, since they're clicky, should equal one pixel for each click. But that makes travelling across the screen very slow. So we make movements proportional to velocity. But this breaks the one-to-one link between wheel position and cursor position.

Well, this turned out not to be so bad. Especially not for using it as a mouse. For drawing, it can be a little difficult to judge, but the simplest thing to do is slow right down and go at one pixel per click. Or go at full speed, which I limited to 16 pixels per click, which is also easy to judge. It's just the intermediate speeds that are impossible to draw with. 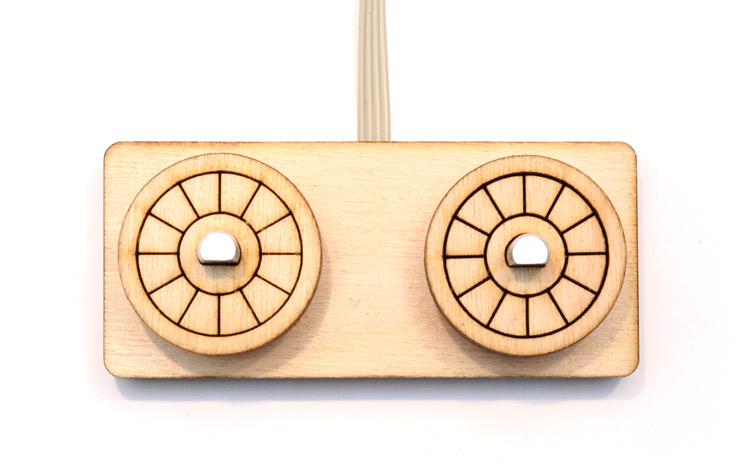 Last of all are the mouse buttons, which can easily be sent directly, but preferably, we should toggle the buttons on or off each time the encoder button is pressed. This will make drawing far easier. But it would make doing anything else very annoying. So I gave the device two modes: plug it in holding a button down to enable toggle-mode.

This worked fine for the left mouse button (light pulldown) but not so for the right button (heavy pulldown). The reason was to do with capacitance, and the rise time of the reset pin. When the right mouse button was released it would pass through the voltage representing the left button, so sometimes it would toggle the left as you release the right. This is, as you can imagine, annoying and unacceptable. But thankfully there's an easy way to eliminate it: just lower the sample rate, as a primitive form of debouncing. This solves the problem entirely, and since a button press takes hundreds of milliseconds it has no effect on responsiveness.

Now to close up the case. 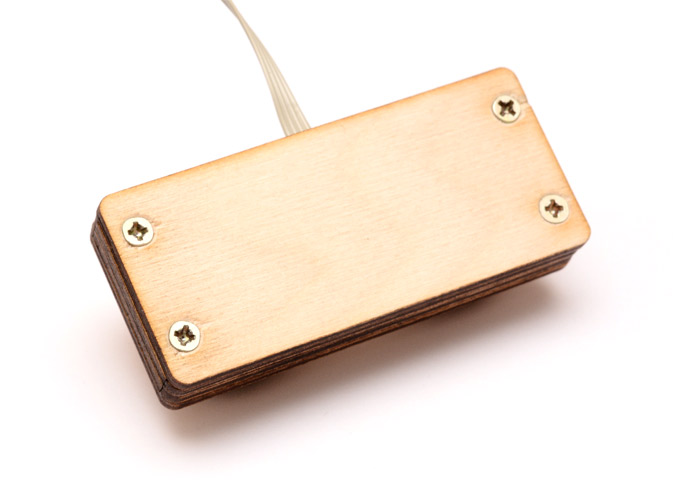 The holes were laser cut, obviously, but I had to countersink them by hand. Manual labour, in this day and age? sheesh. 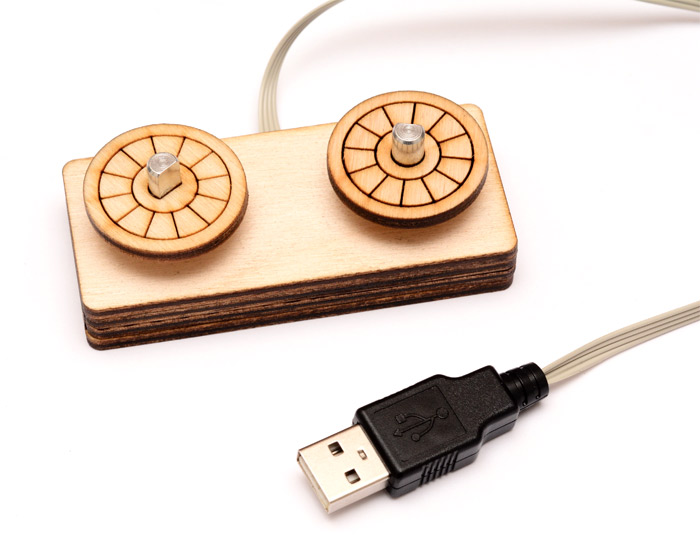 You know what's just occured to me, I should paint it red and have the knobs white... 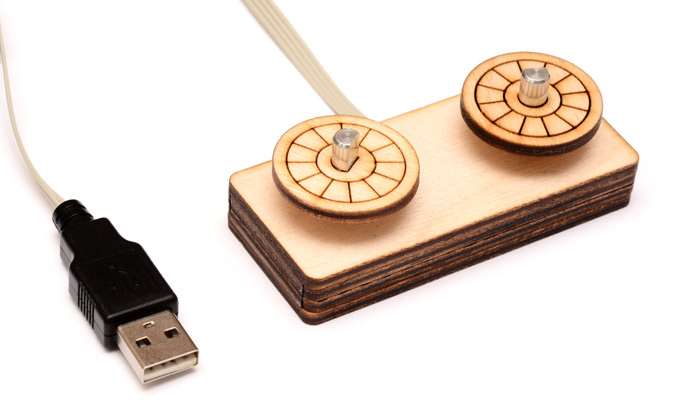 And yes, we could have just taken apart an old ball mouse and stuck knobs on the rotary encoders inside. That may even have produced a better result, with non-clicky encoders. But I didn't have a ball mouse to hand, and I wasn't exactly going to buy one to do this, that's way beyond my budget. Total cost of this creation: about £1.50.

This was quite a quick project, but filming the process – lighting, sound, talking, editing and uploading took more than twice as long as the actual build. I definitely need to streamline the process.

I have probably now shared far more information on this than anyone could possibly want, but just to top it off here is the source code too. Phew.