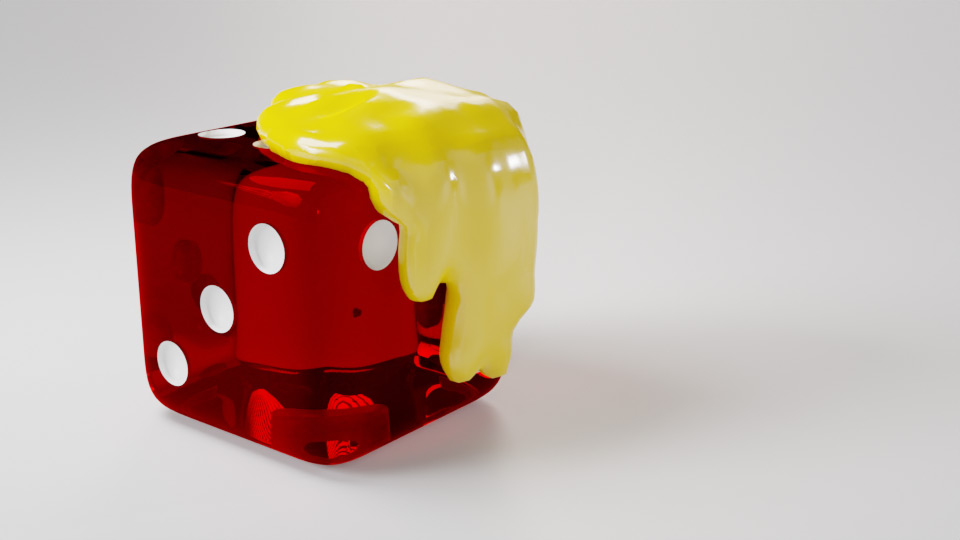 I have been thinking of how to build an ordinary 6-sided die where the probabilities can be surreptitiously altered during a game. The answer, of course, is with non-newtonian fluid.

The dice are hollow, and partially filled with, well, probably not custard, but some variant of silly putty, a viscoelastic fluid. It is rigid and holds its shape well enough to bounce, but when left for a moment it will flow like liquid.

Using the Custard Dice would work as follows:

Through sleight of hand, drop the dice into your dice cup so the desired roll faces upwards. Hold still or place the cup on a flat surface for maybe ten or twenty seconds, and the putty dribbles to the lowest point inside. Roll the dice, and the probabilities are loaded to favour your chosen roll.

It's winter, the days are cold, so now's the perfect time to burn CPU cycles on some raytraced computational fluid dynamics.

Making a loaded die translucent would, of course, entirely defeat the point.

Modelling a viscoelastic fluid is, shall we say, a sticky problem. I attempted to simulate very high viscosity, in fast-forward. Curiously, I found that lowering the resolution gave better results.

Man I love Blender. The recently updated denoising in Cycles means you can get away with much fewer samples. But if you want to render really fast, Eevee is the way to go. It can't quite manage the transluscent plastic, but for a cutaway it's not like I could convince you this was real anyway.

I do like a good cutaway. Cutting. I feel like in the raytraced playground, we could perfectly bisect the cube and let the delicious custard spill out. 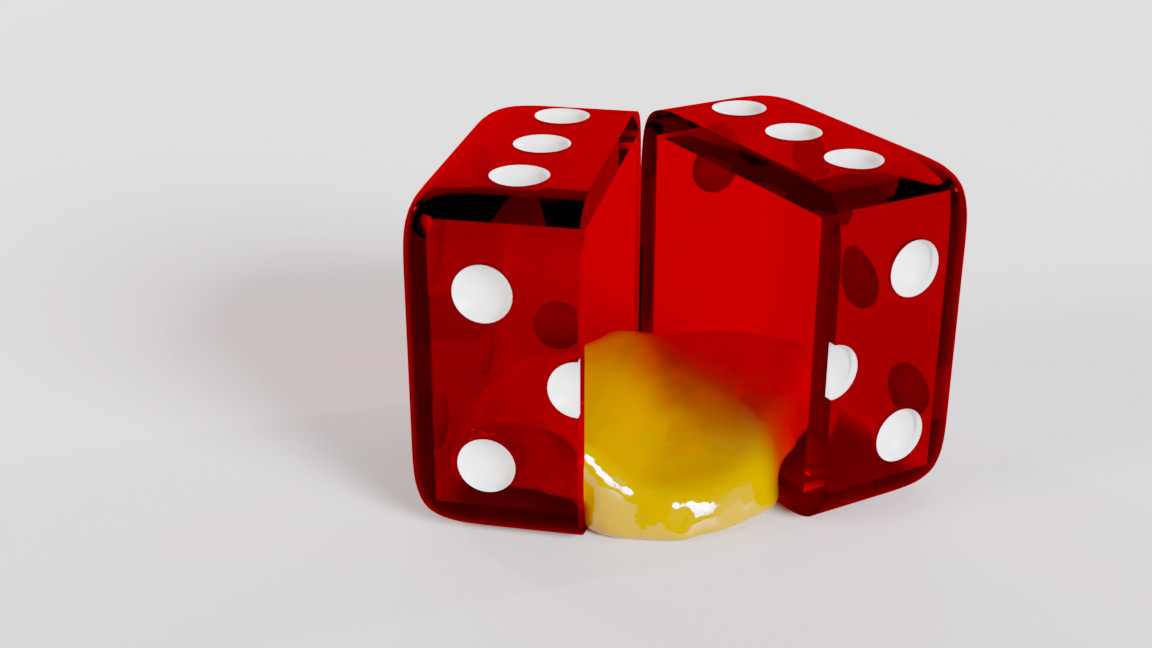 Don't do that, it's going to go everywhere. 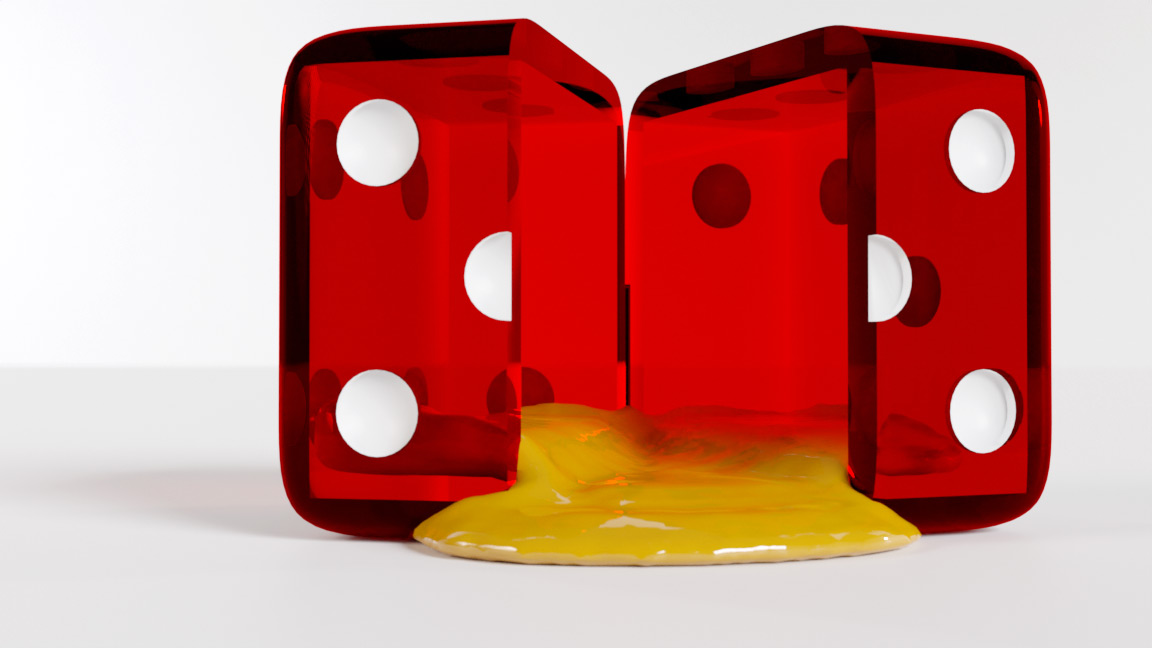 Eww. What a mess. 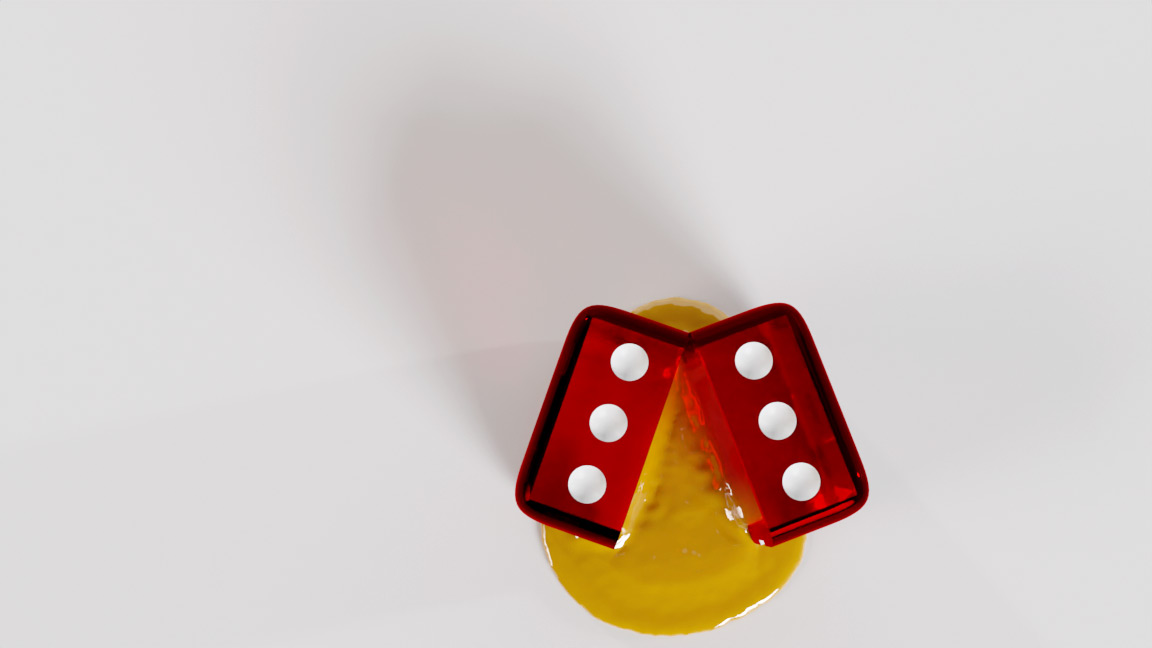 Alternatively we could mould an entire die out of custard and let that splat on the table. 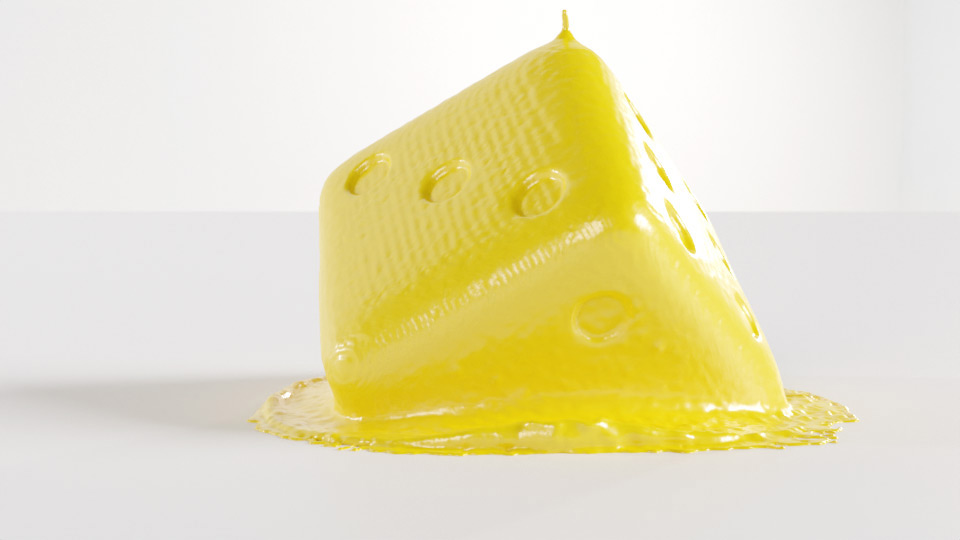 I've somehow lost track of what we were trying to do here.

I ordered some imitation Silly Putty. I also ordered some tungsten powder, to mix with it, in order to up the density. Fun fact: tungsten powder is cheaper than solid tungsten. It's a precursor to solid tungsten in the manufacturing process, which involves sintering. Tungsten has the highest melting point of any metal, which raises some interesting questions about how it can be handled in molten form. But the property we care about is density, where tungsten is on a par with depleted uranium and pure gold, but has both of those beaten on price.

Tunsten powder is even sold as a weighting compound for golf clubs. Note that the density of tungsten powder is not necessarily that high, because of air gaps in the granular form. This shouldn't matter to us, as once it's mixed in, the air will be replaced with putty.

Milling out the inside of a commercial die and gluing two halves together wouldn't be too hard, although there'd be a join. A better idea would be to cast a new die in resin. I suspect the way to get our cavity inside it would be to assemble a very thin-walled cube, fill it with the right amount of putty compound, then resin-cast the outer surface of the die around it. Supporting points could be added in the mould that line up with the dot markings, as these would later be filled with paint.

I did some research: there's a company in Scotland that makes trick dice. One of their products is a settable loaded die in a similar vain to this. It's called the Reloader and it's filled with a small amount of gallium. In order to set the loading, you warm it up in hot water, then leave it to cool in the new position. It's pretty clever. One problem is that it needs to have an internal mesh structure, as evidently the gallium doesn't otherwise stay stuck to the internal walls.

My sample of silly putty arrived. Unfortunately, the viscosity is completely inappropriate. I let it settle on the bottom of an upturned mug. I then put the mug on its side and waited 24 hours, and it had barely drooped at all. I've no doubt it would eventually dribble to the bottom and pool on the table, but it would take days. We need it to dribble in minutes at most. On the plus side, we probably won't need an internal mesh, once it's dribbled a bit, the stuff is very attached to the surface.

The viscosity almost certainly depends on ambient temperature, but I suspect the mix of substances that make up Silly Putty has some ratio that could be adjusted. It's possible that mixing it with, say, kerosene would dilute it enough, but then we may lose that magic non-newtonian property that would let it stay put when the die is rolled. 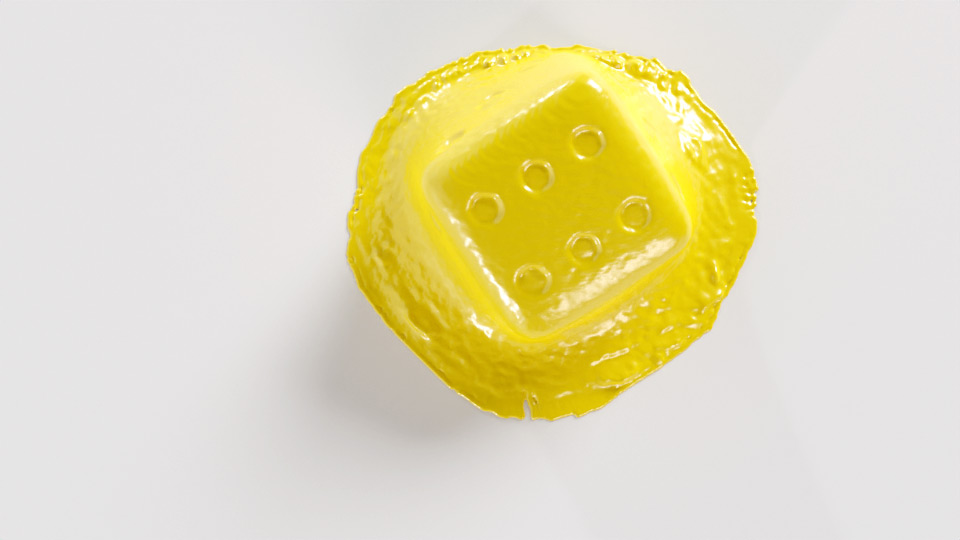