I find chaos theory fascinating, the idea that something can be both deterministic and unpredictable. What better way is there to investigate than a computer model – one with no random parameters, and input values known to a ridiculous number of decimal places. I wrote this program and write-up for an assignment in uni. Needless to say I got the highest mark possible.

Predictability of a Double Pendulum 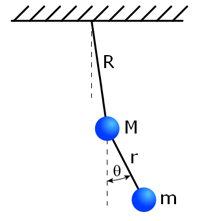 A simulation of a double pendulum was constructed to investigate the predictability of its final position after a set amount of time, for different initial conditions. Certain ranges were found to be predictable while others were chaotic. The boundaries of these regions showed a direct correlation to where the lower pendulum inverted.

Many natural systems exhibit chaos, such as the weather. Despite their deterministic nature these systems can be unpredictable due to their extreme sensitivity to initial conditions. Knowing what defines the chaotic regions is important in many fields.

In the simplest (Ref1) double pendulum (Figure1) m << M, thus the motion (amplitude) of M can be approximated by (eq.1).

where a0 and τ are constants of amplitude and period of M. Hence m is modelled as a single pendulum under acceleration a (eq.2&3)

where ω is the angular velocity of m. Constants r, g are arbitrarily chosen to be 1. Initial values of ω, θ are chosen to be 0.0 and 0.1, respectively.

The first simulation evolves for tmax=100 seconds and records the θfinal. This simulation is repeated through a range of values for a0 and τ, and plotted to a graph (Figure2). Each data-point is a shade of gray corresponding to the value of theta; it is not the brightness that is of relevance but more how it relates to adjacent points. Thus areas forming a smooth gradient represent predictable regions, while the seemingly stochastic areas correspond to chaos. Figure3 shows the same area with tmax=400 seconds. The boundary between chaos and predictability is clearer. 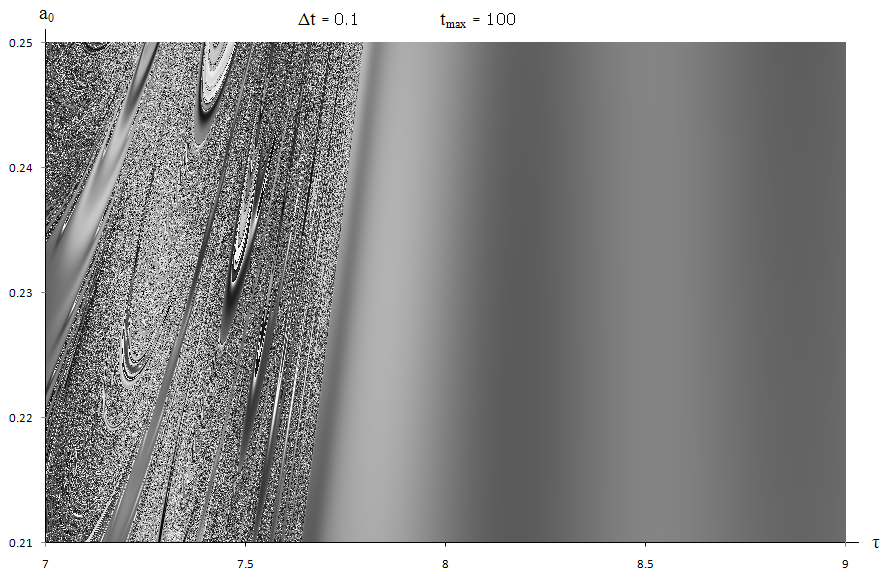 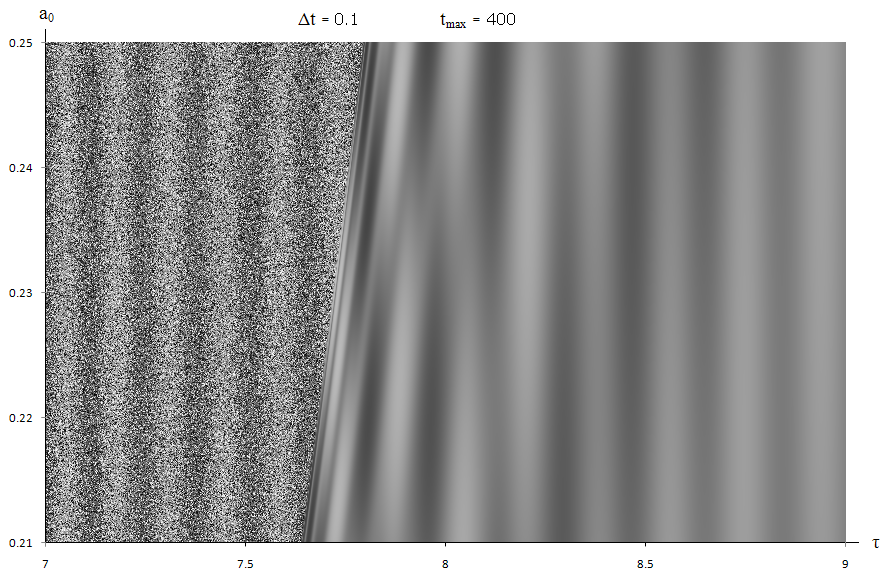 A phase-space plot (ω verses θ) for a single pendulum would be a circle. Figures 4&5 show phase-space plots for simulations inside and outside the chaotic boundary. The chaotic pendulum’s plot stretching to the left demonstrates θ leaving its normal range, i.e. it made a full rotation. Investigating this as the reason for the chaotic region, the program was modified to identify regions where the lower pendulum inverted. This was achieved by measuring the proportion of time θ escaped the range (-π,π) and highlighting the graph in red to represent it. (Figures6&7) 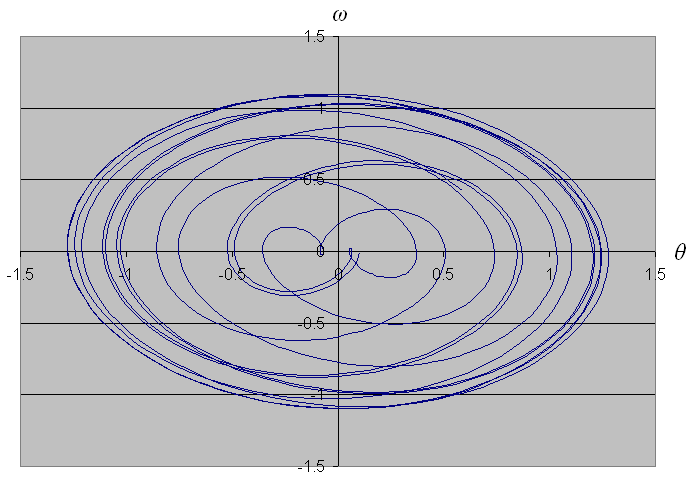 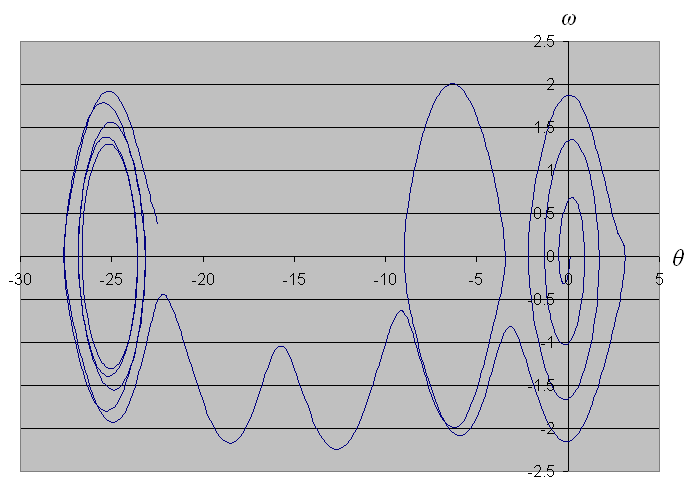 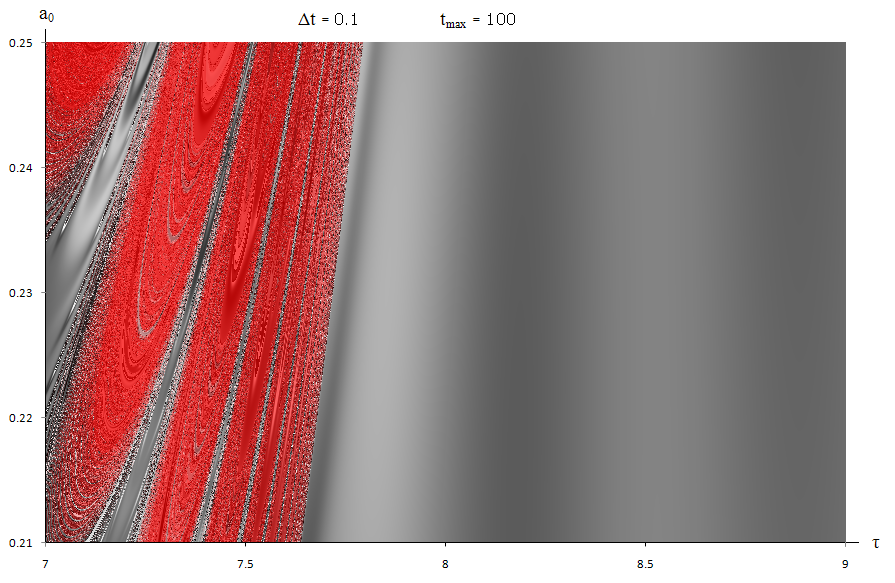 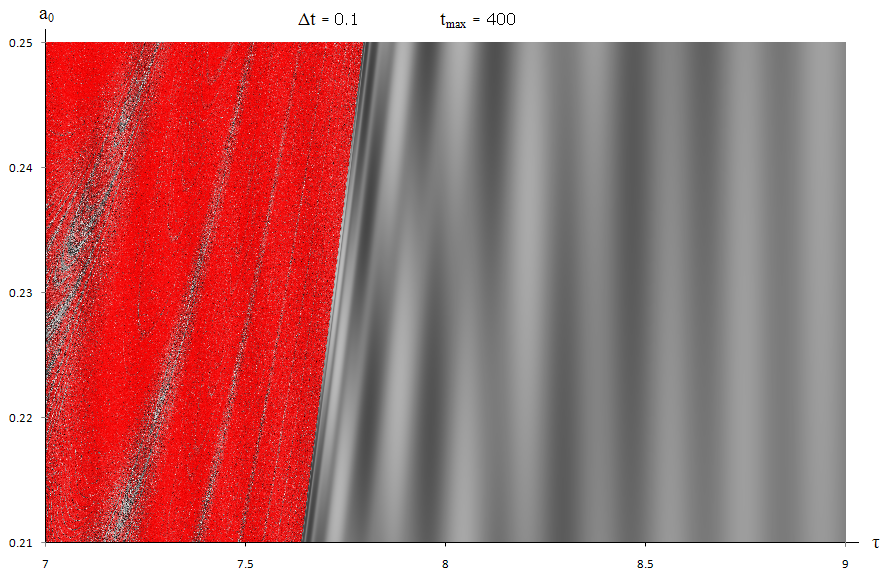 As time evolves, the chaotic regions become clearer and spread asymptotically. The red highlight follows the same area exactly, as can be seen by comparing Figures 2&3 to Figures 6&7. Zooming out, the boundary of chaos surrounds the regular, predictable pattern in a parabola (Figure8). Outside this region the pendulum behaves like a single pendulum as the amplitude of M is too small, or the period of M is too large, to have an effect. The base of the region marks the resonant frequency of the lower pendulum (ref3). 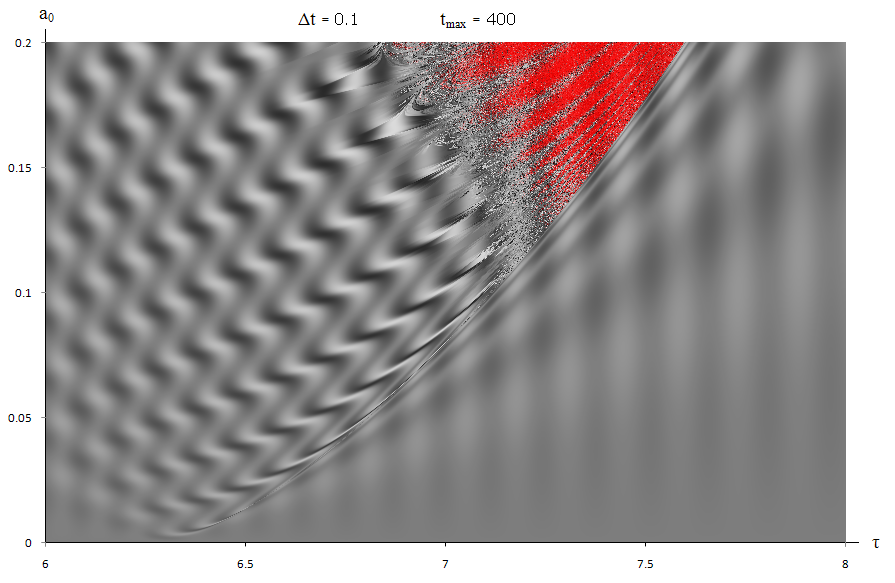 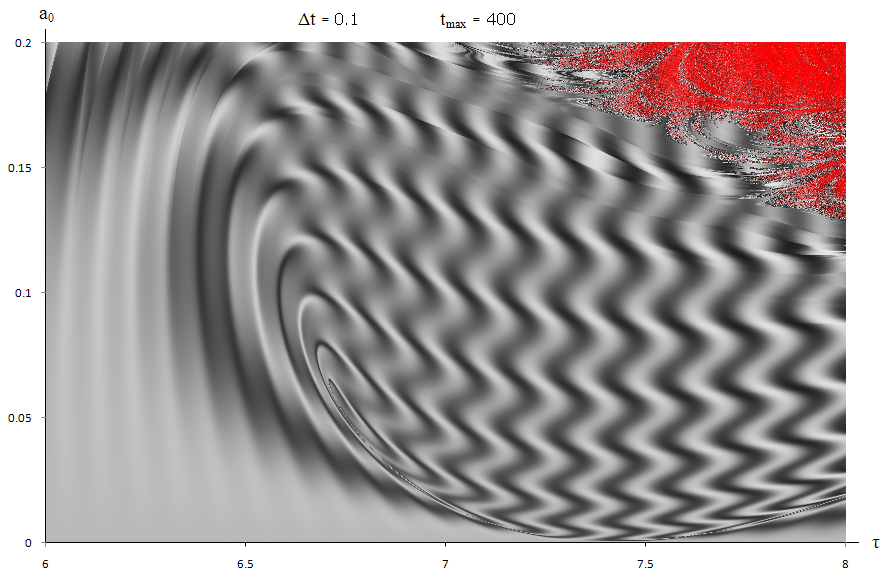 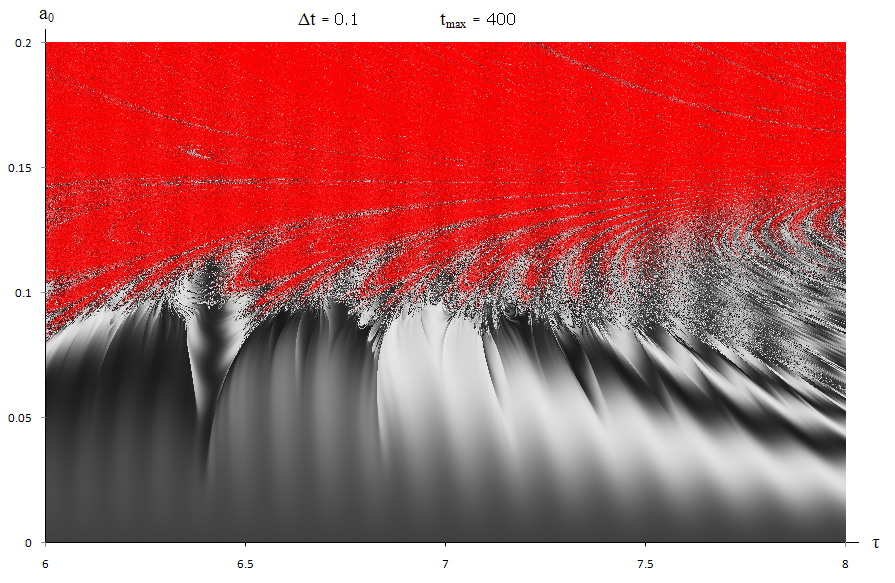 Investigating the dependency on initial conditions, Figures 9&10 show how the same area changes when

(ωinit is kept constant). The chaotic region grows as the pendulum can escape the normal region much easier. At

the graph becomes pure chaos. Changing ωinit would produce similar (but skewed) graphs, akin to jumping ahead in the simulation.

Choosing levels of accuracy is a compromise with computing power and available time. Reducing Δt makes the regions clearer but takes longer to render. Throughout the simulations Δt=0.1, chosen after examining Figure12.

Throughout, all decimal variables were stored as double floats (8 bytes). This gives around 16 places of precision. The limitations of the program are visible when simulations are made in steps of ~10-17 (Figure11). When investigating chaos, rounding errors can have a huge effect on the output (ref2). However, the graphs in this simulation were plotted in steps of ~10-5 hence rounding errors should not have effected the results significantly. 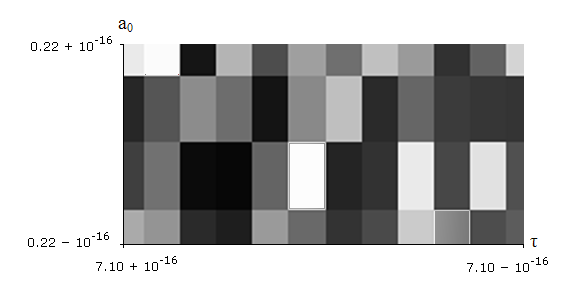 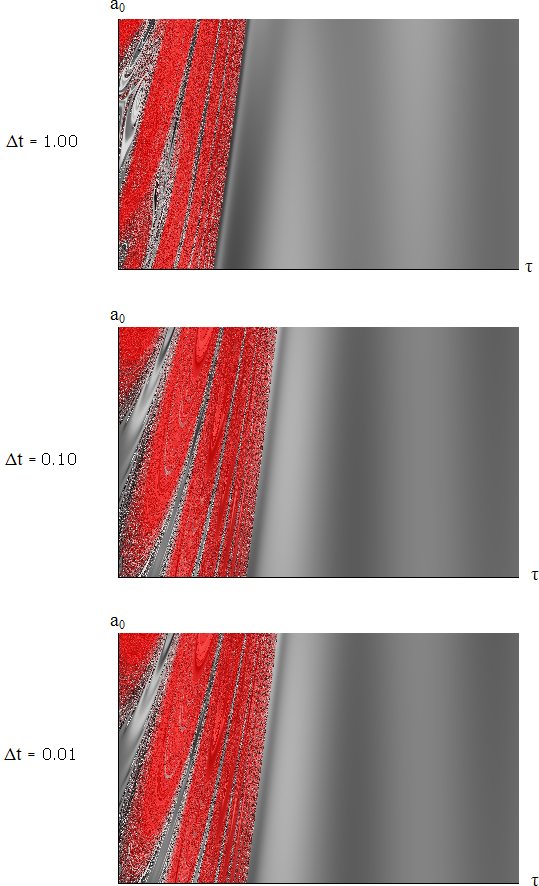 The model itself is only an approximation, assuming the angle of M remains small. This has shown the basic concepts of a double pendulum but a more relevant result would be achieved if m ≈ M. A plot of initial angles for both pendulums on either axis would produce a result similar to Figure13. 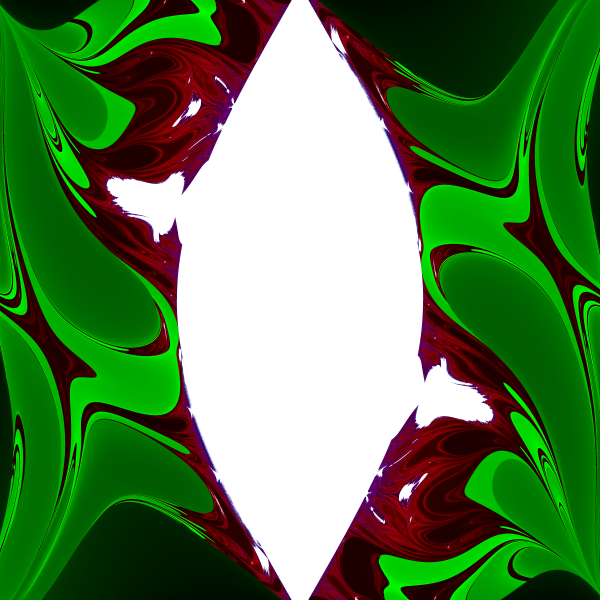 Figure 13.
Double Pendulum plot by Jeremy S. Heyl
The colour of each pixel indicates whether either pendulum of a double pendulum flips within 10

The output in this file was then fed into and plotted using MS Excel.