A Self Pumping Fountain

Benjamin Franklin was first to show that evaporation causes cooling. The process is used in all kinds of industries today.

In fact one of the more exotic forms of computer cooling is an evaporative cooler. Recycling an amount of water through a shower head to promote evaporation can lead to extraordinarily low temperatures. The main reason it remains a niche method is the need to regularly replenish the water supply.

It strikes me that decorative water fountains, for instance those situated in Trafalgar Square, are encouraging evaporation and as such reach a rather chilly temperature, as anyone who has jumped into one will testify.

The Self Pumping Fountain differs little in looks but as you can probably guess from the preceding paragraphs, it derives its pumping power from the as-yet unharnessed energy that is latent in the fontis pools.

The upper dish is the cold reservoir and its closed system is the one into which the fountaining occurs. The lowest dish - a large, shallow pond, if you will - is the (relatively) hot reservoir and its black base helps absorb heat from the sun.

An engine (i.e. a Stirling) works on this temperature difference to provide the aqueous elevation. 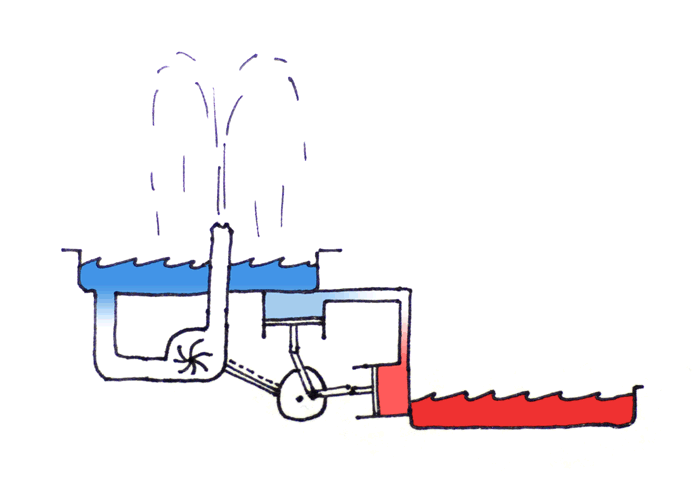 Symbolic sketch. The lower pool may only be at room temperature but is relatively warm compared to the upper pool.